Promoting Welfare of Gender and Sexual Minorities through Corporate Social Responsibility: The Road So Far & What Lies Ahead

Do corporates owe society progress? The concept of corporate social responsibility (CSR) answers this with a clear yes. Underlying CSR is the thought that a corporate body is a part of the society and not apart from it. This being so, corporate bodies should, normatively, share the profit they gain from the society and funnel it towards its progress. Would this combination of a desire for social development and financial resources automatically result in achievement of the desired outcomes?

Where financial deficiency impedes social progress, CSR or corporate philanthropy is a useful driving force. Often, however, this potential fails to reach those who most need it. For instance, India has consistently performed poorly on the Global Gender Gap Index. Yet, CSR funds do not reciprocate the dire need. From 2014-2019, less than 1.5% of the CSR funds are allocated towards gender equality and women empowerment (National CSR Data Portal, 2014–2020). On the other hand, sectors such as education, although needful of attention, gets a disproportionately large portion of CSR funds. This is true despite India’s relatively strong score in Education as per the Sustainable Development Index (Sustainable Development Report 2021, 2021). This disproportionate allocation raises the question - what determines CSR flow, or lack thereof, towards a particular sector? This analysis can help

formulate strategies to direct funds towards where they are needed the most.

Pacta, in collaboration with Solidarity Foundation, recently engaged in research to understand the trends of CSR funding in India and channel CSR funds towards the welfare of 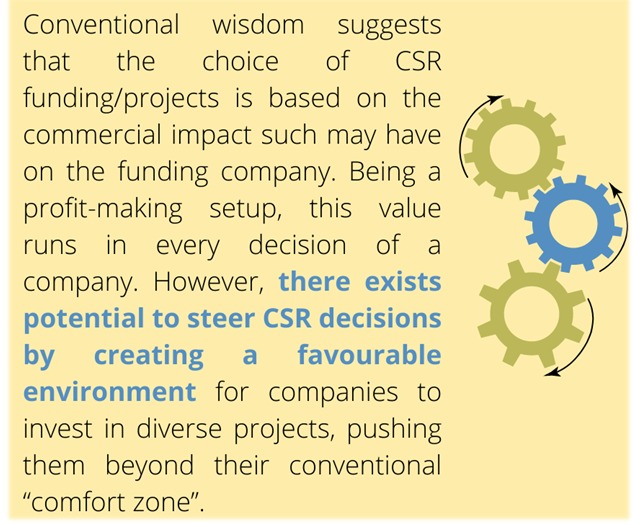 The report found out that:

There is a potential correlation between government policies, initiatives, and programs and the flow of CSR funds towards such sectors. For instance, where several initiatives exist for the education sector, including the Right to Education Act and subsequent policy initiatives pursuant to it such as the different National Education Policies, a significant portion of CSR funds is directed towards the sector. Thus, explicit recognition through “development commitments” or “need-based support” is likely to lead CSR funds towards that area. Factors that further this trend could be pre-made metrics, framework, outcomes, and readily identifiable gaps which assist in better planning or outcome mapping of future CSR projects. Therefore, explicit public or civil society policies and programs accompanied with measurable targets to support sexual and gender community/individuals would likely promote greater CSR fund allocation.

A key force which influences a company’s CSR policy is the risk perception which is associated with adopting a particular social impact. Philanthropic activities tend to have several risks associated with them – including conflict with political ideologies, financial risk of outcome failure, risk of harm to brand value, and social risk of unintended negative consequences. Where sectors such as education, sanitation or poverty alleviation appear appropriate for altruism and “safe” to funnel CSR funds into, sectors such as free media or protection of democratic rights which are important for a vibrant civil society may appear as risky endeavors (India Philanthropy Initiative, 2020). Initiatives for equitable rights for sexual and gender minorities may fall in the latter, thereby coloring them as risky and, thus, unattractive for CSR receipt.

Regressive values, including religious dogmatism, results in constricted flow of funds to sexual and gender minorities’ causes. Sexual and gender orientation has been a site of stringent control by religions in several societies (Defago et al., 2018). Conservative values often view non-binary individuals, including homosexual or transgender individuals, as abnormal. In the past, non-binary individuals have also been subject to conversion “therapies/cures”, including through physical, psychological, and psychiatric methods. Over the last decade, civil society experts have noted a significant growth in conservative and/or regressive forces (The Economist Intelligence Unit, 2020). This may result in SGM initiatives being perceived as commercially risky to dedicate CSR funds to.

A combination of social and legal changes is needed to positively impact the lives of non-binary individuals. Corporate actors can provide significant support in this process by allocating CSR funds towards SGM welfare initiatives. The following measures are likely to create a more favorable environment to invite such contributions:

(2) Recognition of civil, political, and social rights of SGM individuals and community – including, in particular, the right to self-identification and social welfare benefits.

In addition, the report covers direct and indirect ways in which CSR funds can support SGM:

(2) Implementing impact measurement initiatives that report the impact of participation of the SGM community in development outcomes;

The research by Solidarity Foundation and Pacta culminated in a roundtable conference on September 6th, 2021. Several critical aspects were brought forth by participating individuals. Among others, the following contributions require mentioning:

In 2014, the Indian Supreme Court held that discrimination against transgender individual is against the Indian Constitution in the case of National Legal Services Authority v. Union of India. The Court also recognized the rights of transgender individuals to self-determine their gender identity. Pursuant to this, the government of India passed the Transgender Persons (Protection of Rights) Act, 2019. However, to widespread dismay, the Act affronted the right to self-determine one’s gender identity – a backstep from the SC’s ruling.

On the positive side, the act is notable for formally recognizing equality and non-discrimination for the Transgender individuals in educational institutions, employment, and occupational opportunities. It also recognized the additional medical needs of transgender individuals, including the need for accessible sex-reassignment surgery, hormonal therapy, and insurance schemes to help finance these.

In 2021, the technical group on the anticipated Social Stock Exchange released a report which made several mentions of the needs of homosexual and transgender individuals. This denotes a crucial step towards the explicit recognition of SGM welfare as a developmental requirement. While much needs to be achieved regarding use of inclusive identity markers, including within the said report, the mention of the issue of discrimination based on sexual and gender identity is very likely to contribute towards greater funding for their welfare initiatives. Together with the decriminalization of same-sex intimacy in 2018 by the Supreme Court, this development suggests increasingly favorable prospects for CSR fund allocation towards SGM welfare initiatives.

Other crucial problem associated with the current CSR culture, including the lack of need-based CSR allocation, also needs to change to allow for meaningful and impactful CSR utilization.

The Economist Intelligence Unit. (2020). Democracy index 2020 in sickness and in health? https://www.eiu.com/n/campaigns/democracy-index-2020/

LATEST BLOG POSTS
SUBSCRIBE TO PULSE
The Pulse is Pacta’s in-house periodic newsletter that carries legal updates for the social sector. We decrypt legalese into digestible, relevant & actionable content. In every issue, we pick a subject – a new law, amendment or judgement and contextualise it for non-profit founders and administrators.

Pacta upholds and strives to exceed the professional standards. This website is not an advertisement or solicitation of work. Legal information shared here are not and do not make up for professional legal advice. By visiting Pacta’s website you know what you are doing and you are doing it at your risk and cost. We disclaim any liability arising from the information or materials contained on this site.
Social | Impact | Legal
Copyright 2021 Pacta. Privacy Policy
Working. Please wait...
New Version found. Installing.